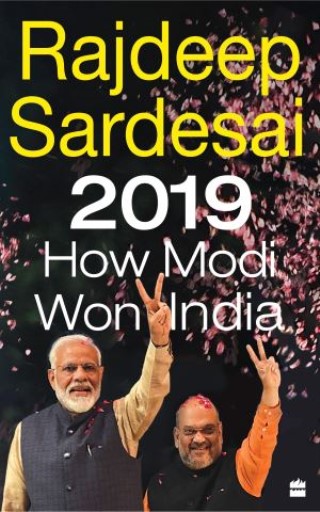 On 23 May 2019, when the results of the general elections were announced, Narendra Modi and the BJP-led NDA coalition were voted back to power with an overwhelming majority. To some, the numbers of Modi's victory came as something of a surprise; for others, the BJP's triumph was a vindication of their belief in the government and its policies. Irrespective of one's political standpoint, one thing was beyond dispute: this was a landmark verdict, one that deserved to be reported and analysed with intelligence - and without bias. Rajdeep Sardesai's new book, 2019: How Modi Won India, does just that. What was it that gave Modi an edge over the opposition for the second time in five years? How was the BJP able to trounce its rivals in states that were once Congress bastions? What was the core issue in the election: a development agenda or national pride? As he relives the excitement of the many twists and turns that took place over the last five years, culminating in the 2019 election results, Rajdeep helps the reader make sense of the contours and characteristics of a rapidly changing India, its politics and its newsmakers. If the 2014 elections changed India, 2019 may well have defined what 'new India' is likely to be all about. 2019: How Modi Won India takes a look at that fascinating story, which is still developing.

RAJDEEP SARDESAI: Rajdeep Sardesai is a senior journalist, author, columnist and news presenter with more than thirty years' experience in print and television news. Having begun his career with the Times of India in 1988, Rajdeep moved to NDTV in 1994. He was the founder-editor of the IBN18 Network, which started news channels like CNN-IBN. He is currently a consulting editor with the TV Today Network and anchors a flagship prime-time show. Rajdeep has won several awards for journalistic excellence including the Ramnath Goenka award, the International Broadcasters prize, the Asian TV award and the Prem Bhatia Political Journalism award (in 2019, for his general election coverage). He received the Padma Shri in 2008. He is the author of three previous books: 2014: The Election That Changed India; Democracy's XI: The Great Indian Cricket Story; and Newsman: Tracking India in the Modi Era. He lives in New Delhi.