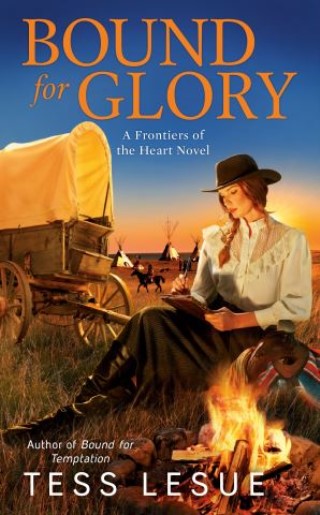 An unwilling legend and the woman who made him into one finally meet in a sizzling encounter.

Nathaniel has many names. They call him Deathrider, White Wolf, the Plague of the West. He’s the ice-eyed killer of the plains; the ghost of the trail; the restless spirit who haunts the frontier from California to Missouri, leaving a trail of bodies in his wake. They say he moves silently through the night and changes form to run with the wolves. Or so the rumors go.…

Ava Archer wouldn’t know. She’s never seen him. But that doesn’t stop her from writing about him. After more than a dozen dime novels about the Plague of the West, she thinks she probably knows him better than he knows himself—even if she wouldn’t recognize him on the street.

Nathaniel is ready to put the rumors about him to bed by confronting A. A. Archer. But he never could have predicted that she wouldn’t be at all what he expected, but rather a sexy redheaded woman with sloe-dark eyes who could slay a man at fifty paces. And she’s not looking to play fair.

Tess LeSue: Tess LeSue writes sexy and adventurous romances set against sweeping historical backdrops. Her current love affair is with the wild landscapes and even wilder men of the Wild West. She is the author of Bound for Eden, Bound for Sin, and Bound for Temptation. Tess also writes literary fiction under the name Amy T. Matthews and teaches creative writing and literature at Flinders University in Australia.