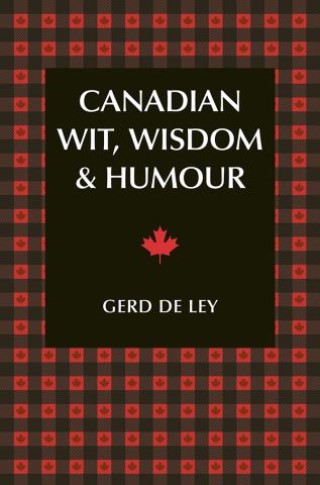 Collecting over 1000 of the wittiest remarks, deepest thoughts and side-splitting one-liners ever attributed to a Canuck, Canadian Wit, Wisdom & Humour features those writers, actors, comedians, politicians, and personalities that best represent the nation of Canada, including Margaret Atwood, Pierre Légaré, O.A. Battista, Norm McDonald, Mike Myers, Jim Carrey and many, many more!

Gerd De Ley: Gerd de Ley is a former English teacher and has been a professional writer and actor since 1975. From an early age, Gerd has been an avid collector of quotations and proverbs from all over the world and has had more than 450 works published in Holland and Belgium. His most comprehensive book, Het Grootste Citatenboek ter Wereld (translated as The Greatest Quotation Book in the World), was published in 2009 and contains over 40,000 quotes. For the past two decades, Gerd has worked together with linguist David Potter to bring his work to English audiences, resulting in publications in England, USA, India, Finland, China, and Vietnam.