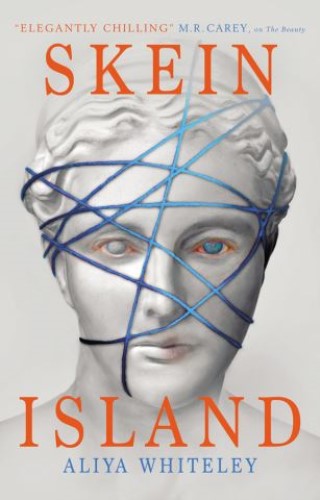 From the author of The Loosening Skin and The Beauty, Aliya Whiteley, Skein Island is a powerful and disturbing look at the roles we play, and how they form and divide us. This new edition features a brand new novelette set in the same world as Skein Island.

Skein Island, a private refuge twelve miles off the coast of Devon, lies in turbulent waters. Few receive the invitation to stay for one week, free of charge. If you are chosen, you must pay for your stay with a story from your past; a Declaration for the Island's vast library.

What happens to your Declaration after you leave the island is none of your concern.
From the monsters of Ancient Greece to the atrocities of World War II, from heroes to villains with their seers and sidekicks by their sides, Skein Island looks through the roles we play, and how they form and divide us. Powerful and disturbing, it is a story over which the characters will fight for control.
Until they realise the true enemy is the story itself.

Aliya Whiteley: Aliya Whiteley writes novels, short stories and non-fiction and has been published in The Guardian, Interzone, Black Static, Strange Horizons, and anthologies such as Fox Spirit's European Monsters. She has been nominated for the Pushcart Prize twice, and won the Drabblecast People's Choice Award in 2007. Her writing is often violent, tender, terrifying and funny. It has garnered much critical praise and provoked discussion.