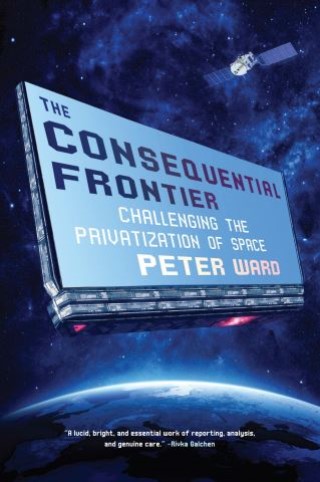 Challenging the Privatization of Space

"A lucid, bright and essential work of reporting, analysis and genuine care. Peter Ward has given us a new way to think about private endeavors in space. Superb."⁠—Rivka Galchen, author of Little Labors

Earth is in trouble—so dramatically that we’re now scrambling to explore space for valuable resources and a home for permanent colonization. With the era of NASA’s dominance now behind us, the private sector is winning this new space race. But if humans and their private wealth have made such a mess of Earth, who can say we won’t do the same in space?

In The Consequential Frontier, business and technology journalist Peter Ward is raising this vital question before it’s too late. Interviewing tech CEOs, inventors, scientists, lobbyists, politicians, and future civilian astronauts, Ward sheds light on a whole industry beyond headline-grabbing rocket billionaires like Bezos and Musk, and introduces the new generation of activists trying to keep it from rushing recklessly into the cosmos.

With optimism for what humans might accomplish in space if we could leave our tendency toward deregulation, inequality, and environmental destruction behind, Ward shows just how much cooperation it will take to protect our universal resource and how beneficial it could be for all of us.

Peter Ward: Peter Ward studied journalism at the University of Sheffield before moving to Dubai, where he reported on the energy sector. After three years in the Middle East, he earned his master’s degree in business journalism from the Columbia University Graduate School of Journalism. His work has appeared in GQ, Bloomberg, The Economist, and Newsweek. He lives in New York City.