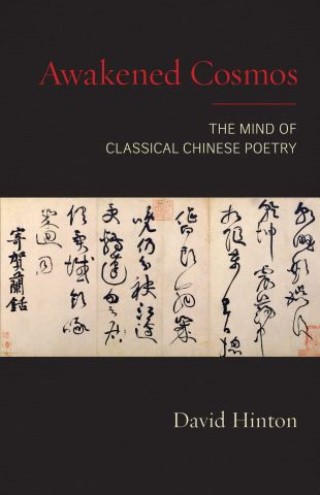 The Mind of Classical Chinese Poetry

A deep and radically original exploration of Taoist and Ch'an (Zen) Buddhist wisdom through the lens of the life and work of Tu Fu, widely considered China's greatest classical poet.

What is consciousness but the Cosmos awakened to itself? This question is fundamental to the Taoist and Ch'an (Zen) Buddhist worldview that shapes classical Chinese poetry. A uniquely conceived biography, Awakened Cosmos illuminates that worldview through the life and work of Tu Fu (712-770 C.E.), China's greatest classical poet. Tu Fu's writing traces his life from periods of relative normalcy to years spent as an impoverished refugee amid the devastation of civil war. Exploring key poems to guide the reader through Tu Fu's dramatic life, Awakened Cosmos reveals Taoist/Ch'an insight deeply lived across the full range of human experience.

Each chapter presents a poem in three stages: first, the original Chinese; then, an English translation in Hinton's masterful style; and finally, a lyrical essay that discusses the untranslatable philosophical dimensions of the poem. The result is nothing short of remarkable: a biography of the Cosmos awakened to itself in the form of a magisterial poet alive in T'ang Dynasty China.

David Hinton: DAVID HINTON's many translations of ancient Chinese poetry and philosophy have earned wide acclaim for creating compelling contemporary works that convey the actual texture and density of the originals. The author of countless books of essays and poetry, Hinton has been awarded a Guggenheim Fellowship, numerous fellowships from N.E.A. and N.E.H, the Landon Translation Award, the PEN American Translation Award, and a lifetime achievement award by The American Academy of Arts and Letters.