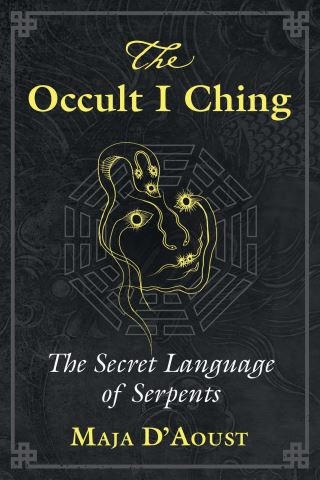 The Occult I Ching

The Secret Language of Serpents

An illustrated guide to the occult history, serpent magic, and practical application of the I Ching

• Explores how the I Ching formed the basis of the earliest Taoist philosophies, its complex correlation with human DNA, and its relationship with artificial intelligence

• Provides new contemporary analysis of each of the 64 hexagrams, their changing lines, and archetypes of the I Ching

One of the oldest books in the world, the I Ching has been used in China for millennia to open a dialogue with divinity, gain insight and wisdom, and pull aside the curtain of reality to reveal the light of the heavens. Yet, despite its popularity over thousands of years, few understand its mysterious origins, symbolism, or occult connections.

In this illustrated guide, Maja D’Aoust applies her significant experience as a professional practitioner and scholar of the I Ching to provide a history of the oracle, explain the mechanisms at work behind it, and offer a new experiential approach to its interpretation. The author begins by examining the discovery of the I Ching by the first mythical emperor of China, Fu Xi, a divine being with the body of a serpent. She reveals how Fu Xi’s eight original trigrams, also called the Ba Gua, provided a sacred language of symbols that allowed for communication between the diviner and the spirit world. Using the I Ching’s principles of cosmology as a basis, the shamans of ancient China developed the earliest Taoist philosophies of nature, medicine, martial arts, and mathematics as well as ecstatic practices, war strategies, birth and death rituals, agricultural systems, and alchemical studies. D’Aoust further shows how the I Ching relates to the mathematical sequences of biology and human DNA, examining the correlation between the serpent’s tail and the double helix. She reveals how the ways the oracle connects with your own inner knowing parallel the ways in which DNA repairs itself.

Providing a new analysis of each of the 64 hexagrams and their changing lines and archetypes, the author explores each hexagram’s meanings in depth, alongside original artwork highlighting the serpent magic within the system and tools to help you interpret the I Ching based on your own individual experience. Revealing how the oracle holds complex networks of meaning that language alone fails to capture, D’Aoust offers a new understanding of the Book of Changes and its many hidden lessons.

Maja D’Aoust: Maja D’Aoust, known as the Witch of the Dawn, is a practicing Witch and scholar of alchemy and occult lore. After completing her bachelor’s degree in biochemistry, she studied Oriental medicine and acupuncture and later earned her master’s degree in transformational psychology with a focus on shamanism, the I Ching, and ancestors. She is the author of A Witch’s Bestiary: Visions of Supernatural Creatures, co-author of The Secret Source, and creator of a Tarot deck, The White Witch Tarot. She lives in Los Angeles.