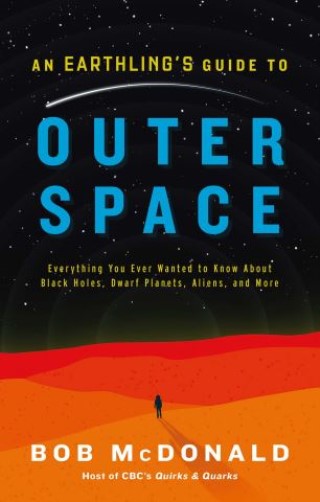 An Earthling's Guide to Outer Space

Everything You Ever Wanted to Know About Black Holes, Dwarf Planets, Aliens, and More

Beloved science commentator Bob McDonald takes us on a tour of our galaxy, unraveling the mysteries of the universe and helping us navigate our place among the stars.

How big is our galaxy? Is there life on those distant planets? Are we really made of star dust? And where do stars even come from?

In An Earthling’s Guide to Outer Space, we finally have the answers to all those questions and more. With clarity, wisdom, and a great deal of enthusiasm, McDonald explores the curiosities of the big blue planet we call home as well as our galactic neighbours—from Martian caves to storm clouds on Jupiter to the nebulae at the far end of the universe.

So if you’re pondering how to become an astronaut, or what dark matter really is, or how an asteroid wiped out the dinosaurs, look no further. Through a captivating mix of stories, experiments, and illustrations, McDonald walks us through space exploration past and present, and reveals what we can look forward to in the future.

An Earthling’s Guide to Outer Space is sure to satisfy science readers of all ages, and to remind us earthbound terrestrials just how special our place in the universe truly is.

Bob McDonald: Bob McDonald has been the host of CBC Radio’s Quirks & Quarks since 1992. He is a regular science commentator on CBC News Network and science correspondent for CBC TV’s The National. He has been honoured with the 2001 Michael Smith Award for Science Promotion from the Natural Sciences and Engineering Research Council of Canada; the 2002 Sandford Fleming Medal from The Royal Canadian Institute; and the 2005 McNeil Medal for the Public Awareness of Science from the Royal Society of Canada. In November 2011, he was made an Officer of the Order of Canada. In 2014, an asteroid designated 2006XN67 was officially named BOBMCDONALD in his honour. Bob lives in Victoria, British Columbia. Visit him on Twitter @CBCQuirks.