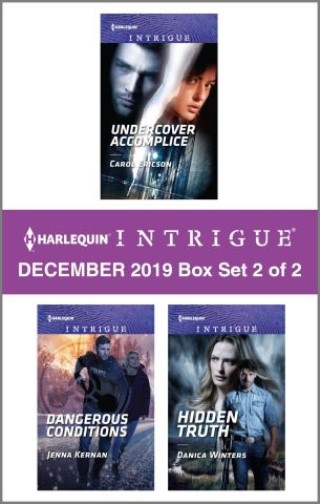 When Delta Force soldier Hunter Mancini learns the group that kidnapped CIA operative Sue Chandler is now framing his team leader, he asks for her help. But could she be hiding something that would clear his boss?

Former soldier Logan Lynch’s first investigation as the constable of a small town leads him to microbiologist Paige Morris, whose boss was killed. Yet as they search for the murderer, Paige is forced to reveal a secret that shows the stakes couldn’t be higher.

When undercover CIA agent Trevor Martin meets Sabrina Parker, the housekeeper at the ranch where he’s lying low, he doesn’t know she’s an undercover FBI agent. After a murder on the property, the operatives must work together, but can they discover their hidden connection before it’s too late?

Look for 6 compelling new stories every month from Harlequin® Intrigue!

Carol Ericson: Carol Ericson lives in southern California, home of state-of–the-art cosmetic surgery, wild freeway chases, and a million amazing stories. These stories, along with hordes of virile men and feisty women clamor for release from Carol’s head until she sets them free to fulfill their destinies and her readers’ fantasies. To find out more about Carol and her current books, please visit her website at www.carolericson.com, “where romance flirts with danger.”Publishers Weekly Bestselling author, Jenna Kernan, writes romantic suspense for Harlequin intrigue. Winner of the Book Buyers' Best award and two-time Rita nominee, Jenna has published over 30 novels for Harlequin. Her popular PROTECTOR series continues in 2019. Jenna enjoys gold prospecting, scuba diving and gem-hunting. Jenna lives in Florida with her husband.  Contact her on her website, on Facebook or on Twitter. For a FREE ebook visit https://www.jennakernan.com/Danica Winters is a bestselling author who has won multiple awards for writing books that grip readers with their ability to drive emotion through suspense and occasionally a touch of magic.
When she’s not working, she can be found in the wilds of Montana testing her patience while she tries to hone her skills at various crafts (quilting, pottery, and painting are not her areas of expertise). She always believes the cup is neither half full nor half empty, but it better be filled with wine.