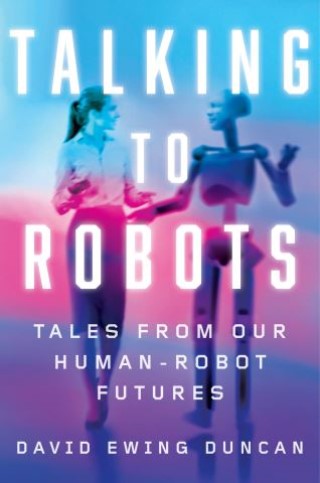 Tales from Our Human-Robot Futures

What robot and AI systems are being built and imagined right now? What do they say about us, their creators? Will they usher in a fantastic new future, or destroy us? What do some of our greatest thinkers, from physicist Brian Greene and futurist Kevin Kelly to inventor Dean Kamen, geneticist George Church, and filmmaker Tiffany Shlain, anticipate about our human-robot future? For even as robots and A.I. intrigue us and make us anxious about the future, our fascination with robots has always been about more than the potential of the technology–it’s also about what robots tell us about being human.

David Ewing Duncan: David Ewing Duncan is an award-winning science journalist in print, television, and radio; and the best-selling author of nine books published in 21 languages. He is Curator of Arc Fusion, a recent columnist for the Daily Beast, and a frequent contributor to Wired, Vanity Fair, MIT Technology Review, The New York Times, Atlantic, and others. He has also written for Fortune, National Geographic, Discover, Life, Outside, and Newsweek. He is a former commentator for NPR's Morning Edition, and a special correspondent and producer for ABC’s Nightline. His book Calendar was a bestseller in 14 countries; he also wrote the bestseller Experimental Man. David’s work has won numerous awards, including Magazine Story of the Year from AAAS. David [PE1] lives in San Francisco, where he is a member of the San Francisco Writer’s Grotto, a writer’s society.