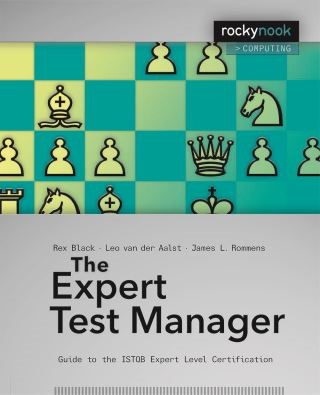 Author has served as president of both the ISTQB and ASTQB.

We expect this to be the first book to market that covers the recently ratified syllabus for expert test management.

The Expert Test Manager offers a complete, one-stop preparation guide for the reader who is otherwise qualified (based on experience as a test manager) to take the Expert Level Test Manager exam

A useful resource that presents ideas that are highly useful for all senior test managers, test directors, quality managers, and directors of quality

With over a quarter-century of software and systems engineering experience, Rex Black is President of Rex Black Consulting Services (www.rbcs-us.com), a leader in software, hardware, and systems testing. For over fifteen years RBCS has delivered services in consulting, outsourcing, and training for software and hardware testing. Employing the industry's most experienced and recognized consultants, RBCS conducts product testing, builds and improves testing groups, and hires testing staff for hundreds of clients worldwide. Ranging from Fortune 20 companies to start-ups, RBCS clients save time and money through improved product development, decreased tech support calls, improved corporate reputation, and more.

As the leader of RBCS, Rex is the most prolific author practicing in the field of software testing today. His popular first book, Managing the Testing Process, has sold over 40,000 copies around the world, including Japanese, Chinese, and Indian releases, and is now in its third edition. His six other books on testing-Advanced Software Testing: Volumes I, II, and III, Critical Testing Processes, Foundations of Software Testing, and Pragmatic Software Testing-have also sold tens of thousands of copies, including Hebrew, Indian, Chinese, Japanese, and Russian editions. He has written over thirty articles; presented hundreds of papers, workshops, and seminars; and given about fifty keynote and other speeches at conferences and events around the world. Rex is the immediate past President of the International Software Testing Qualifications Board (ISTQB) and a Director of the American Software Testing Qualifications Board (ASTQB).

Jim Rommens is a results-oriented information technology professional with extensive experience in project management and software development; and he has a working knowledge of all phases of systems analysis and design. Jim’s sound knowledge of technical and business practices—and his proven leadership record, strong organizational skills, and extensive knowledge—has led him on a career path from Software Developer, to Project Manager, to Systems/Business Analyst, to Applications Developer, to Project Manager, to Programmer Analyst, to Webmaster, and finally to Senior IT Project Manager. For many years, Jim has been involved in teaching and training others in his fields of expertise.Leo van der Aalst holds almost 30 years of IT experience. After having gone through the classic path (from programmer to project manager) Leo has specialized since 1990 in the test field, in which he held positions such as test manager, test consultant and line manager of a test organization. His knowledge and experience in the project- and test management field have been used and developed further during a number of international projects and consultancy trajectories (a.o. in USA, Germany, Denmark, Austria and in the Netherlands). He was the Development Lead of the ISTQB Foundation and Advanced Agile-Tester Syllabi and professor Software Quality at Fontys University (Eindhoven, The Netherlands). Besides all this Leo is an Agile coach at Sogeti Netherlands and is co-author of the TMap NEXT, TMap NEXT BDTM and TMap NEXT in scrum books. Finally, Leo is a much sought-after teacher of test training, a regular speaker on national- and international conferences, and he is the author of several articles.