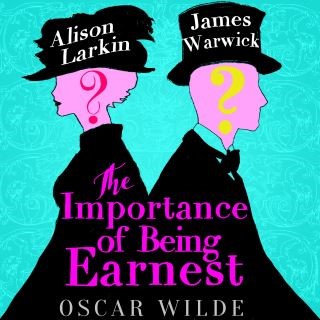 The Importance of Being Earnest

TV star James Warwick and award-winning narrator/comedienne Alison Larkin co-star in this accessible, dazzlingly funny two-actor production of The Importance of Being Earnest - A Trivial Comedy For Serious People.
We're in England in 1895. Algy and Jack are debonair bachelors-about-town who plan to court Gwendolen and Cecily, despite opposition from the formidable Lady Bracknell.
Jack was adopted as a baby, and discovering the truth surrounding his mysterious origins becomes critical to his future happiness.
This co-production between Alison Larkin Presents and Steven Jay Cohen is unique in that it is the first 'full cast' audio production performed by two people.
James Warwick's many starring roles on television including Tommy in Agatha Christie's Partners in Crime Tommy and Tuppence series on PBS for Masterpiece Theater. He has also played many leading roles on Broadway and in the West End, originating the role of Brad in The Rocky Horror Show and playing King Arthur in Camelot. His last starring role in an Oscar Wilde play was in Peter Hall's production of The Ideal Husband on Broadway.
Alison Larkin is the award-winning narrator of over 150 audiobooks, an internationally acclaimed comedienne and the bestselling author of The English American, a novel. Hailed by The Times as "hugely entertaining" and by AudioFile Magazine as "unparalleled...a narrator to seek out" she is the perfect choice to play all the women in Oscar Wilde's most famous play.